Denny is a guitarist and composer with over 15 years of professional teaching and playing experience. He studied at The Australian Institute of Music and obtained a Bachelor of Music Composition and Production degree.

He incorporates composition and songwriting in his lessons, with a big focus on creativity and ultimately having fun!

Utilising all of his own experience, education, and philosophies regarding music, his aim is to obtain the most efficient and enjoyable Musical Journey for all his students, regardless of age or level.

At a young age, Denny initially studied a combination of both classical disciplines and modern styles eg Rock, Blues, etc.

By the time he reached his tertiary studies, he had also developed a great passion for Jazz and improvised music in general.

Alongside his pursuits of expanding his knowledge of composition and improvisation, he soon realised that he had found considerable benefit to both his writing and playing while studying Ethnomusicology as well as Film Music, alongside his major subjects.

It was at this time that he had himself begun teaching Guitar (coupled with Music Theory and Composition), as well as performing at local venues.

Over the years he had formed several groups that performed his original music, which allowed him to hone his skills as a band-leader and further his experiences as both a performer and composer.

This occurred in tandem with the other professional aspects to his playing, which came in the form of live performances for weddings, corporate events, etc.

Along the way, all of these experiences helped shape his approach to learning as well as teaching. No one student is exactly the same, so he always moulds his lessons to suit the individual and their pace. 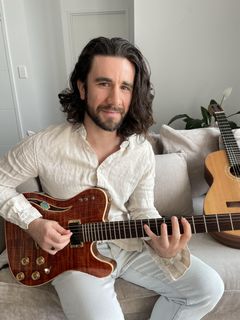